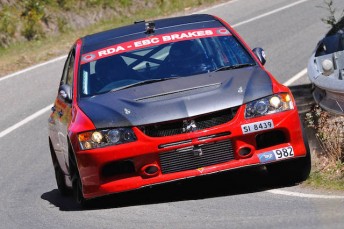 A two-year deal struck with the Burnie City Council has ensured the immediate future of the Tasmania’s newest tarmac rally.

The breakthrough comes following the event’s maiden running in February which was taken out by Mitsubishi driver Eddie Maguire.

The single day rally is being earmarked as a crucial lead-up to the famed Targa Tasmania which celebrates its 25th anniversary next year.

Event director Mark Perry said the council agreed the rally, to again be held in February, had a bright future.

The two-year deal comes after it was confirmed that Burnie will be an overnight stop-over for the signature Targa Tasmania rally to be held from April 11-16.

“We recently committed to returning to Burnie for an overnight stop with Targa Tasmania, which will inject a huge amount of money into the local economy,” Perry said.

“So now signing a new two-year deal for Targa Hellyer Gorge will further strengthen our relationship for the future.”

“Burnie welcomed the new Targa Hellyer Gorge event with open arms in 2015 and we are very proud to have our own Targa event that is unique to this region,” Cr Dow said.

While providing a vital stage to fine-tune preparations for Targa Tasmania, the Hellyer Gorge event also provides an outlet for competitors not wishing to commit to a multi-day rally.