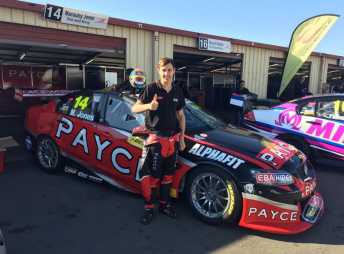 Brad Jones Racing has made the long-awaited announcement that Macauley Jones will partner Dale Wood in this year’s Pirtek Enduro Cup.

The 20-year-old son of team owner and former driver Brad has been competing in the Dunlop Series since midway through last season.

The youngster had been expected to be given the drive since February, having cut laps in Wood’s car at the pre-season Sydney test, before also appearing in a host of Friday practice sessions.

Jones sits 14th in the Dunlop Series standings after the opening five rounds of the season and faces a big step up into main series competition.

“It will be great to work with Dale, the GB Galvanizing Racing crew and engineers over the next few months,” said the former Australian Formula Ford front-runner.

“It hasn’t really hit me yet that I’m going to be a part of the biggest race in Australian history (the Bathurst 1000).

“I’ve been going to Bathurst for quite a few years now; it is a place that I’ve been dreaming of competing at since I was a kid.

“I’m really pumped for it and so excited that I have the opportunity to race not only in the Bathurst 1000 but the Endurance Cup as a whole.”

Brad Jones says that the collective experience within the BJR garage will help his son adapt.

“It certainly hasn’t been an easy decision,” said Jones.

“(But) he will have a lot of experienced and talented people to help him with the transition.

“He has a ride day, (a) test day plus another co-driver session at SMP (Sydney Motorsport Park) to continue to acclimatise himself with the car and team.

“His pace when he has had the opportunity to drive the #21 car has been really good and I’m looking forward to seeing him continue that form in the enduros.”

Today’s announcement is also official confirmation from the team that Andrew Jones and Luke Youlden will return to partner Jason Bright and Fabian Coulthard respectively.

Jones and Youlden have both run main series practice sessions already this year and will again get behind the wheel for co-driver practice at SMP.