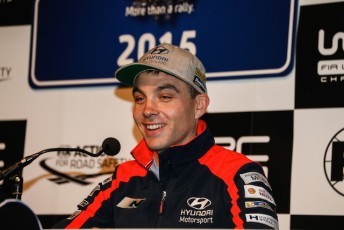 Kiwi star Hayden Paddon has been vaulted into the main Hyundai World Rally team squad for the Australian round at Coffs Harbour.

Paddon will take the place of Dani Sordo in the #8 i20 with the Spaniard switching to the #20 satellite Hyundai N operation for the WRC round from September 10-13.

Based on Paddon’s knowledge of the Coffs gravel stages, team principal Michel Nandan has ordered the switch as Hyundai chases down second in the manufacturer points.

“We are in tight fight for second in the manufacturers’ championship with just a few points separating us from Citroen,” Nandan said with Hyundai sitting two points behind Citroen in the points.

“After careful consideration we have agreed that adapting momentarily our line-up offers us the best chance to secure the points we need on this unique and challenging event.

“Hayden is very familiar with the rally and after his recent strong performances on gravel he is more than capable of supporting us in this battle.

“Dani did not compete in Australia in the last few years – and he never took part in the Coffs Harbour based event – so he has less experience of the particular demands of this rally.”

Paddon, who shot to a career best result of second with co-driver John Kennard in Italy in June, said it won’t affect his approach to the Coffs-based rally.

“I’m very pleased that the team has faith in me but at the end of the day it is just a car number change for me,” Paddon said.

“I will have the same approach to the rally as always but this time I will be happy to challenge for points that can help the team in the manufacturer standings.”