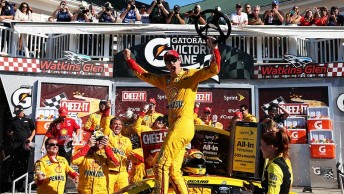 Joey Logano has come through on the final corner to win at Watkins Glen after defending series champion and points leader Kevin Harvick ran out of fuel.

It was a weekend sweep for Logano, who took victory in the XFinity Series race, and earn his first road course victory in each category.

It’s the second-straight week that fuel has played a key role, ironically it was Logano who was one of the drivers who ran short at Pocono just seven days ago.

Caution periods dictated the fuel strategy, with Harvick having to stretch his car as Logano closed him down in the final laps. It appeared to be enough when the Ford driver ran wide at Turn 1 at the start of the final lap.

However, Harvick slowed with two corners remaining and even appeared to pick-up some fuel through the final turn as Logano rounded him up. Harvick bumped the back of Logano, but then coasted to the line with Kyle Busch just beating him to the chequered flag.

“We were patient and methodical all day long,” said Logano who only led the final lap to win the race.

“I felt pretty sure the #4 was going to run out and then it got into the last lap. Right at the end I was able to get by him there.

“Last week (Pocono) I lost one like that and now I have won a race that way.

“Every driver wants to add a road course victory and to take both races here this weekend is pretty cool.”

Busch’s second place now putting him inside the top-30 in points and giving him a shot of the Sprint Cup title.

Watkins Glen brought out plenty of tough racing and wild moments. One of the more bizarre came for Denny Hamlin who had his bonnet flip-up!

This race had been for the past number of years the domain of Australia’s Marcos Ambrose. The Richard Petty Motorsports Ford, now in the hands of Sam Hornish Jr., finished the race in ninth.