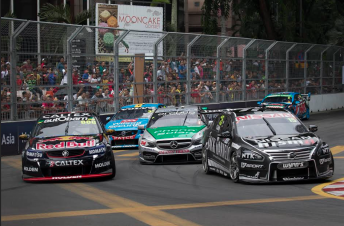 KL City GP organisers will reconvene with V8 Supercars later this month in the hope of finalising a deal for the Australian category to return to Kuala Lumpur next year.

Five V8 Supercars ran demonstration races at this year’s inaugural KLGP following the signing of a heads of agreement with event promoter GT Global Race for a full championship event from 2016.

GT Global Race president and CEO, M Arrasu, told Speedcafe.com that the event is guaranteed to return next year under the company’s five-year agreement with KL City Hall.

Although impressing event management with its demos at the weekend, there remains several commercial considerations to be ironed out before V8 Supercars’ return can be locked in as the meeting’s main act.

Key among them is the date of the event, which organisers are keen to bring forward to “April, May or June” due to the country’s Formula 1 Grand Prix at nearby Sepang moving to September.

V8 Supercars is however understood to have had KL pencilled in for August in next year’s calendar, arranging a low cost freight model that requires time for all cars to be shipped home from the event.

The Australian championship has attempted to compress its calendar down into a nine month window next season, meaning a delicate re-juggle will be required if the date shifts.

“With the F1 moving to September, it is very close to our event,” Arrasu told Speedcafe.com.

“We need to see how we deal with that and we need to do it quickly. I think it’s something we will sort out in the next month.

“I had a good meeting with (V8 Supercars’ CEO) James Warburton (on Sunday) to discuss it further, but we are too busy here (at the event).

“We will have another meeting in a couple of weeks time, either here or in Australia.

“Hopefully we can get the dates organised and finalise the commercial terms.”

Warburton has meanwhile been bullish on the category’s need for a dedicated pit building next year, enabling pitstops while doubling as a corporate facility.

This year saw small marquees erected in the tight pitlane, with teams moving their cars and equipment to and from the paddocks for their corresponding sessions.

“From a format perspective we have got to have the ability to run a championship round and not compromise the integrity of the championship,” Warburton told Speedcafe.com.

“Facilities is obviously important and all in the agreement that we’ve got.”

Arrasu enthuses that the facility can be improved for next year, but admits that full pit garages may not be possible due to the tight confines of the precinct.

“There are a few things that we’ve learnt on the track now, so we might have to reconfigure some of the location of the race control and medical centre. We may put it somewhere else,” he said.

“Currently the paddock is split with the GT cars (housed behind the pitlane) and the other categories (further towards Turn 2), so we’re looking at putting them in one location.

“But it may still have to be a remote paddock because we want the pitlane and starting grid to be right in front of the twin towers (Petronas Towers).”

Other commercial terms will meanwhile include the level of V8 Supercars involvement in the running of the event.

This year saw V8 Supercars awarded the television production contract through its Supercars Media arm, as well as lending its organisational experience to the first-time race promoters.

“I’ve been having those discussions with V8 Supercars and the experience that comes with the V8 teams is huge,” said Arrasu.

“We’ve been working with V8 (TV) production team and we will discuss with them more. I believe there are many areas where we can learn from the V8 experience from Australia.”