Australia’s Nissan GT Academy finalists have been whittled down to just three hopefuls as eliminations began at the Silverstone finals.

The competition sees gamers battle through a series of challenges to secure a prize contract to join Nissan’s GT3 program.

After the 30 candidates drove a selection of race cars at Bedford Autodrome on Friday, the competition ramped up over the weekend. 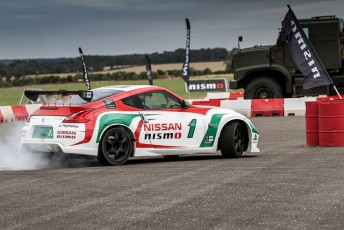 The finalists undertook an obstacle course designed to test fitness, before Sunday saw teams take part in a head-to-head Gymkhana driving a Nissan 370Z ahead of the first eliminations.

As a result, each team saw three of its competitors eliminated with Team Australia losing Corey Creed, Tyler Blackburn and Simon Feigl.

Elliott Schutte, Nick Dalton and Matthew Simmons remain as representatives of Team Australia as the competition continues this week.

“This is a chance of a lifetime; they’ve all worked so hard to come over to Silverstone so to have everything on the line and be eliminated this morning was tough,” said Team Australia mentor Rick Kelly.

“Gymkhana is not easy and having seen two of your team mates shipped back to Australia earlier they knew one small error could mean the same thing for them.

“There was a lot of pressure today but I’m glad they all attacked it the way they did.”