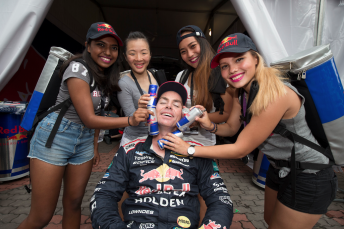 Red Bull has a strong presence at the KL City GP

Expectations that the KL City GP can become one of V8 Supercars’ most important rounds for corporate sponsors have grown following promising local engagement at the inaugural event.

Multi-national V8 Supercars team sponsors including Red Bull, Nissan, Jack Daniel’s, Castrol, Volvo and Polestar have all had varying levels of representation at the circuit.

The event is being used by the respective companies as an opportunity to showcase V8 Supercars to a combination of their executives, customers and local media ahead of the planned championship event in 2016.

Most visibly, Castrol’s enthusiasm for the event has seen it take additional signage on Chaz Mostert’s Prodrive Falcon in KL, utilising the windscreen banner space left blank by this year’s rollback of Ford support.

Nissan Motorsport has meanwhile been among the most vocal in its support of V8 Supercars’ quest to expand into Asia and, according to marketing manager Nick Ryan, is highly encouraged by the KL experience.

“I think this could develop into our biggest corporate event of the year to be completely honest, the interest is that high,” Ryan told Speedcafe.com.

“Our key partners are hugely engaged this weekend which is exciting and very promising. I think this is the tip of the iceberg for the future.

“As a lot of the central offices for our business partners are through Asia, it’s highly accessible for them. They’re finally getting to sample who we are and what we do.

“Australian rounds can be difficult and challenging, only select people may come to those. I think next year we’ll have an enormous contingent of people from all around the region and Australia coming along.” Castrol increased its branding on the Prodrive for for KL

In line with Red Bull Malaysia’s official partnership with the KL City GP, the Red Bull V8 Supercars team has welcomed a number of the energy drink giant’s key local clients to engage with its own program at the circuit.

“This weekend is an opportunity to feel what the market is like and what the appetite is for taking advantage of the opportunity of being here from a corporate point of view,” team owner Roland Dane told Speedcafe.com.

“There are opportunities there and for sure we’re at a very different price point and accessibility point to Formula 1, which is really the only other gig that is available to them on four wheels.

“We’re happy to see what we can bring to the table in terms of sponsorship engagement if we come back here next year.”

“We have already placed an expression of interest into the market place (for next year’s event) and the response has been fantastic,” Neville-Smith told Speedcafe.com

“I have spent a lot of time in Asia, but our first trip to KL this week has uncovered so many amazing venues and facilities which will fit perfectly with our groups next year.

While its potential is being heralded, key V8 Supercars figures are also realistic on the need for local promoter GT Global Race and its partner KL City Hall to improve the operation of the event.

Delays in completing the circuit saw a late start to track action on Friday, while investment will need to be made in areas including the pitlane and corporate facilities ahead of next year.

“It needs a few things ironed out,” admitted Dane.

“But it’s the first time they’ve done a street circuit like this and it doesn’t surprise me that there’s going to be some hiccups along the way.

“I think on balance they’ve done a pretty good job and I’d like to see them take it to the next level and make it a regular part of our calendar.”