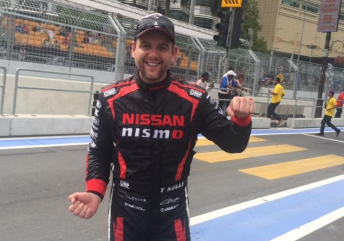 Todd Kelly scored pole, but missed out on the Armor All Pole cheque handed out at championship rounds

Todd Kelly took pole position for the V8 Supercars showcase at the KL City GP in a tight qualifying session on the streets of Kuala Lumpur.

Kelly edged out rivals Craig Lowndes and Chaz Mostert in a 20 minute run that ended with the top three separated by just 0.07s.

After a rain-hit Friday, qualifying proved the first opportunity for the drivers to sample the challenging 3.2km venue in dry conditions.

While the five-car event is only a demonstration ahead of a planned championship round next year, the drivers were clearly pushing hard across the chicane kerbing and bumpy braking areas.

Lowndes then slotted his Holden into second with the chequered flag out, 0.062s shy of pole.

That bumped Mostert to third and Scott McLaughlin’s Volvo to fourth.

Struggling without a cool suit, Will Davison ended up fifth after running down the Turn 13 escape road on his final lap.

“It was good to get out there and have a good crack at it,” Kelly told Speedcafe.com.

“The young blokes were having a fair old dip even in the wet yesterday so I thought we better step it up a notch.

“We’ve not really had a chance to tune the car too much yet because practice was wet, so it’s certainly far from comfortable.

“There’s a few high-speed, loaded corners where it’s stepping sideways on the bumps and nearly firing into the fence.

“There’s be a fair bit of tuning to do before the race.”

Lowndes is also confident that there’s more speed to be found ahead of the afternoon’s race.

“Everyone was improving every lap just trying to find the last tenth,” he said.

“It was great to have a good run on the circuit. I think everyone will find more time.

“It’s a really gutsy circuit and it suits our cars. We take a lot of kerb and it’s quite bumpy.”

The V8 Supercars will return to the circuit for a 20 minute race later this afternoon.