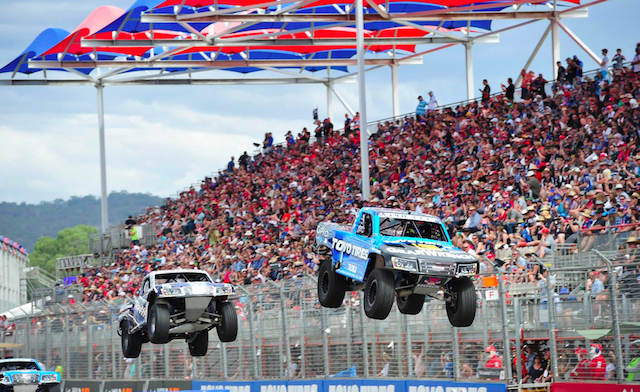 The show-stopping Stadium Super Trucks will spread its wings to Sydney with an event confirmed for Spotless Stadium at the Olympic Park venue on October 31.

Huge public interest has prompted the US-based trucks to add the Sydney stadium event to its already widely publicised booking on the program for the Castrol Gold Coast 600 from October 23-26.

Creator Robby Gordon will dispatch 10 trucks from Charlotte, North Carolina, with a mix of US and Australian drivers to be confirmed in the near future.

The 600bhp trucks will kick off with street races complete with launching ramps at the Surfers Paradise street track before preparing for the Sydney event.

Sydney will be the first time the Super Trucks have competed in a dedicated stadium environment outside North America.

The Stadium Super Trucks were introduced to Australian audiences at the Clipsal 500 earlier this year when they proved a smash hit for their high flying aerobatics and lively cornering behaviour.

Gordon, who made his name in IndyCar before moving on to NASCAR and major offroad events, said he has been overwhelmed by competitor and fan response.

“We had a hell of a time at the Clipsal 500 in March and we were delighted with the way the Aussie fans embraced our spectacular trucks,” Gordon said.

“We have no shortage of US or Australian drivers wanting to be involved in this two-event series so the quality is going to be outstanding.

“While the Australian fans have seen how spectacular our trucks can be on the ramps on a street track, they are in for a special treat with our stand alone stadium event at Spotless Stadium. It’s going to be crazy”.

The Stadium Super Trucks will also be supported by a range of action sports activities that will allow local riders and drivers the chance to perform on the world stage.

Tickets for the Stadium Super Truck Spotless Stadium Sydney event will go on sale to the public on August 13 at 9am through ticketek.com.au.