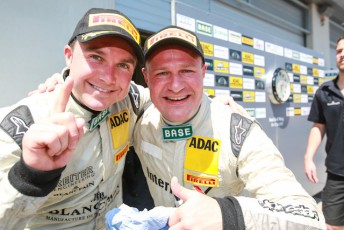 The Nissan V8 Supercar co-driver joined the renowned Reiter Engineering squad for two rounds of the German GT series at the Red Bull Ring and Spa-Francorchamps in June.

It proved to be a trip of mixed results for Russell, who scored victory on debut alongside Tomas Enge in Austria, before a crash in practice forced the team to pull out of the following Spa event.

The 33-year-old Queenslander has been eager to expand his GT career aided by several impressive performances at the Bathurst 12 Hour. 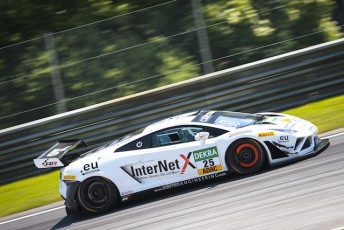 Following the trip, Russell now feels he has started to make his mark in the European GT racing scene, which has boosted his hopes of securing more drives in 2016.

“I was received pretty well and I think I have established myself as a name over there.

“There is scope for more opportunities in Europe.

“I think Reiter Engineering were pretty happy it is just a case of trying to work out where I slot in.

“They have only got a few more rounds left for the rest of the year, so I would be pretty keen to see what their program is for next year.

“I sort of get the feeling that it is whether their is budget for me to come over.

“If there is budget from their sponsors it is not a large stretch for me to fly over.

“I certainly think there are no doors being shut on me on the international front.”

While competition in Europe remains high on his list for next season, Russell is keeping a close eye on the emerging Australian GT Endurance Series, which is set to begin in 2016.

“There has been some talks about a few different things (concerning Australian GT),” added Russell.

“It is quite exciting because it is going to match the Blancpain Series in a way.”

Russell will turn his attention to the Porsche Carrera Cup Australia which resumes at Sydney Motorsport Park from August 21-23.