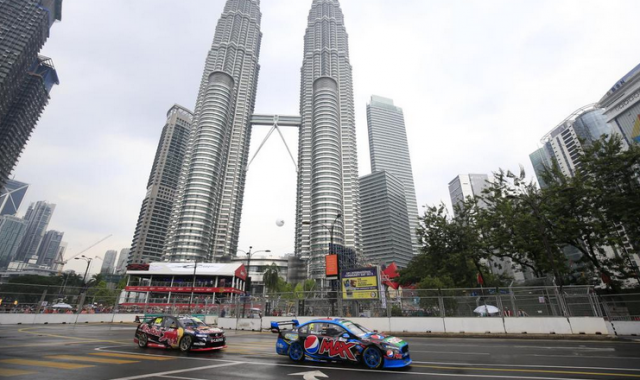 Mostert and Lowndes on track in KL

Chaz Mostert set the fastest time in a wet opening practice session for the five-driver V8 Supercars showcase at the KL City GP.

Although there was no further rain, the track remained wet after a heavy downpour while Craig Lowndes was on the circuit for his earlier demonstration run.

Mostert was second out of pitlane but soon overtook Lowndes as the drivers explored the grip level of the brand new layout.

Fastest early, Mostert was displaced at the top by Lowndes with three minutes remaining, before returning serve with a session topping 1:36.10s on his final lap.

The Prodrive Ford star had been the only man to sample the escape roads during the session, suffering what proved to be a harmless off at Turn 10.

“It’s pretty scary going out, not so much in the session but just in the roll around, realising how tight it is,” Mostert told Speedcafe.com of the circuit.

“Once you get out there and the adrenalin kicks up it’s a pretty mean track. The kid in you is definitely up for the challenge.

“With the ripple strips and the bumps, it’s a cool layout. It actually feels like there’s no fences and you’re actually just racing on the streets. It’s a really funny feeling.”

McLaughlin meanwhile admitted the layout was daunting in the wet conditions.

“It’s a little bit sketchy in the wet. Craig did a bloody good job earlier with a lot of water on the track,” he said.

“I’m pretty scared of the whole joint at the moment to be honest but once it dries I’ll be fine.”

The V8 Supercars will return to the track on Saturday for qualifying.