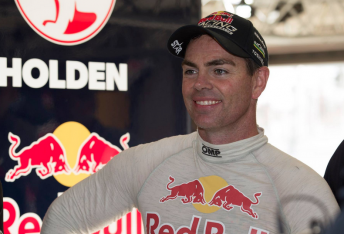 Craig Lowndes is awaiting clearance to return to the Bathurst 12 Hour in February following the acquisition of the event by V8 Supercars.

Crucial to the decision is any plans that may be hatched by his Red Bull Racing Australia team or the UK arm of Triple Eight Race Engineering, which runs GT3 cars in Europe.

Lowndes is a natural target for both local and international GT teams, having won the 2014 race in a gripping finish alongside John Bowe, Mika Salo and Peter Edwards in a Maranello Ferrari 458.

Manoeuvring for drivers is expected to ramp up in the wake of V8 Supercars taking over the event from James O’Brien’s Yeehah Events.

When approached by Speedcafe.com, Red Bull boss Roland Dane said it was too early for his squad to contemplate fielding an entry for next year’s 12 Hour or an entry on behalf of T8 UK.

Lowndes says his first move is to talk to his V8 team boss before weighing up any offers which may spring up for a drive, including a return to Maranello.

“I’ve got to talk to Roland and find out what’s going on,” Lowndes told Speedcafe.com.

“Roland in the past, with the exception of this year with the pre-season test clash, hasn’t stopped me doing it.

“I’m always talking to other teams in the GT world but nothing is confirmed yet.

“I’m hoping to get back there (Bathurst 12 Hour). It’s a great event in a sense of the racing.

“Any time you get an opportunity to drive around Bathurst its good. It’s just a different demographic.”

Fellow 2014 Bathurst 12 Hour star Shane van Gisbergen is in a similar position to Lowndes ahead of joining Red Bull for next year’s V8 Supercars Championship.

The Kiwi also has a factory deal with McLaren, with which he competes in the Blancpain Endurance Series, although that concludes at the end of this year.

Lowndes meanwhile says he intends to explore more GT opportunities abroad in 2016, but notes that his Platinum rating within the FIA’s driver seeding system can work against him.

“When Roger Lago pulled out of the Spa 24 Hour we started to sniff around to see if there was any other opportunities but no-one wants a Platinum because they have already got those drivers,” Lowndes said.

“They are looking for silver and gold drivers. So for me it actually hurts me unless you are confirmed in a car. It’s hard to just rock up and get a drive.”

Lowndes said the opportunity to race international drivers at the Bathurst 12 Hour opens up potential to be drafted into key endurance races such as the Nurburgring and Spa 24 Hour events, or even the signature Le Mans 24 Hour.

“When you’ve got the Europeans coming across and competing in our backyard it’s really good to beat them and to show them that we are no dills,” he said.

“We have got some great teams out here. Some good operators. Good drivers. We can be world class.”