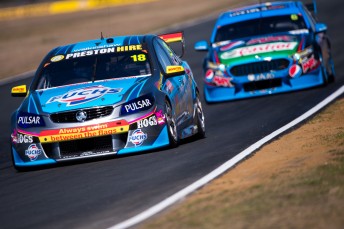 Lee Holdsworth believes there is no silver bullet that will solve his lack of pace in qualifying which was further highlighted at the Coates Hire Ipswich Super Sprint.

The Charlie Schwerkolt Team 18 driver endured a difficult weekend as he missed out on a top 10 result aided by continual struggles in qualifying.

Holdsworth has qualified inside the top 10 just twice this season and his difficult run continued at Ipswich, recording an average starting position of 19.6 over the three qualifying sessions.

Qualifying pace has been an issue across Walkinshaw Racing’s four car stable, with seventh spot for the HRT entry of James Courtney in Race 18 qualifying, the best result over the weekend.

Holdsworth says it’s difficult for the team to pinpoint the precise reasons for the lack of pace, resulting in several trial and error set up changes to recover the deficit to the front runners.

“We can’t sit on our hands and expect it to get better. It is going to take a lot of hard work and hopefully not too many more rounds before we are back on top of it,” Holdsworth told Speedcafe.com.

“It is really frustrating. I came to Ipswich expecting some pretty good things as these cars were quick there last year.

“There is a little bit of not getting the tyre working but also mid corner, if you can’t hold the corner speed then you have no chance in qualifying.

“There is no silver bullet like one click of damper, it is going to be something more significant, but it is going to take a few other things to come into line as well.

“We are working so hard at it. It is not for a lack of trying I’ve been working really well with my engineer and the mechanics and we have a good thing going with the guys.

“I’m pleased with how the guys are working but the speed is something we need to get on top of.”