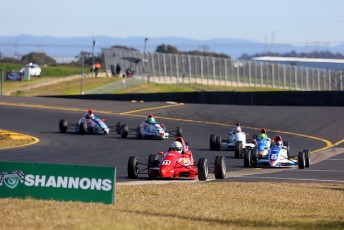 The winner of the 2016 Australian Formula Ford Series will compete in the USF2000 Scholarship Shootout event at Laguna Seca next year.

The event sees aspiring single seater drivers from around the world compete in a knockout competition for a $200,000 (USD) prize to help fund a campaign in the 2017 USF2000 Championship.

USF2000 is the first rung on the ladder in the Mazda Road to Indy ladder system.

This is the latest step in the alliance between the Formula Ford Association and the Mazda Road to Indy program which was forged in 2014.

“As part of our strategic review in 2013 we identified the need to develop pathways for Formula Forders that wanted to further their development,” said Formula Ford Association Chairman, John Van Leeuwen.

“Pathways is a word that gets thrown around a lot but we wanted something that actually meant something to the drivers.

“Something that not only gave them a leg up in their career but also initiatives that helped overcome the financial challenges of progressing a career in motorsport and this is what this opportunity offers our competitors.”