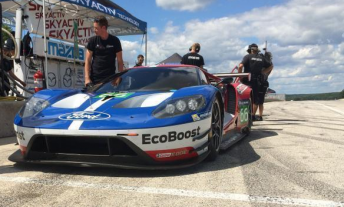 Ford’s WEC and United Sportscar 2016 challenger has finished its maiden run in the United States after turning laps at the Elkhart Lake circuit.

At the hands of Scott Maxwell and Billy Johnson, the Ford GT was put through a searching day of testing as it prepares for next season.

While it has been seen undergoing private testing in Europe and at the former Mosport Park in Canada, it was the machine’s first run in the US.

Constructed to meet the new-for-2016 GTE regulations, the program will be operated by Chip Ganassi Racing with Felix Sabates, with a two-car Ford GT effort in both the WEC and the United Sportscar championship next year.

Based on the all-new Ford GT road car, the GTE-spec racer will make its competition debut at the Daytona 24 Hour in February, marking the 50th anniversary year of the GT40 filling the podium at Le Mans.

The widely anticipated return of Ford as a factory entry at Le Mans was confirmed a day before the 24 Hour race in June.

Ganassi’s expansive operation has netted a variety of championship wins in difficult disciplines but next year will mark the first time it has competed at Le Mans.

The Ford GT will undergo Balance of Performance testing for the FIA in France next month.

A number of other teams shared Elkhart Lake with the Ford operation including the Mazda SKYACTIV prototype.