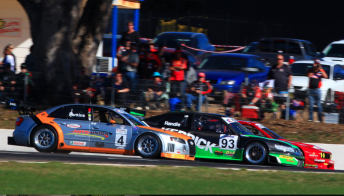 The third round of the series will see 18 cars line up at the Ipswich track, with Perkins set to drive the impressive Darren Hossack Audi A4.

Perkins is no stranger to Sports Sedans after appearing in the Audi at previous round at Winton Motor Raceway in May, before mechanical problems curtailed his weekend.

Six-time champion Kerry Baily will be among the podium contenders behind the wheel of his Aston Martin DB9, while Formula 4 race winner Thomas Randle will steer the familiar Saab sports sedan.

The field will be complimented by three MARC V8s driven by Keith Kassulke, Michael Benton and Tony Alford.

A season’s best entry of 12 cars, including the return of the championship’s most experienced driver Chris Gilmour in a new F311 Volkswagen chassis, are set to contest three Australian F3 races.

Jon Collins and Ricky Capo will continue their title fight with the pair separated by just three points.

Queensland Raceway will also provide the backdrop for the final round of the three race Porsche GT3 Cup Challenge Jim Richards Endurance Trophy.

Jon McCorkindale and James Abela are set to go head-to-head for the coveted title, while Ryan Simpson will aim to extend his overall series points lead.

In the Australian Formula Ford Series, Cameron Hill remains the man to beat after winning the last six races.

The Australian Manufacturers Championship will host two 200km endurance races featuring the annual ‘Fight in the Night’ on Saturday.