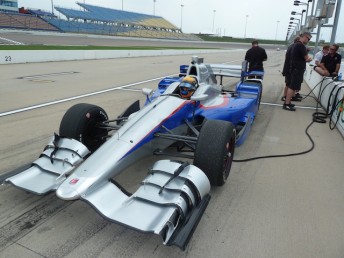 The US-based Australian is set to take to the wheel at Sonoma on August 13, utilising the second Indy Lights driver test permitted for IndyCar teams under the series rules.

Andretti, Team Penske, Chip Ganassi, Rahal Letterman Lanigan and Schmidt Peterson will also field cars for the test, which is seen as crucial ahead of the double points closing round at the same venue at the end of the month.

Brabham recently ran with Andretti on the Iowa Speedway, which followed a brief filming outing at Indianapolis, where the Aussie hopes to race next year.

“It is going to be an interesting day with a number of other teams bringing some really good drivers,” Brabham told Speedcafe.com of the Sonoma running.

“It is going to be a big challenge on the track with current IndyCar Series drivers and other guys like Nelson Piquet Jr who has raced just about every major series on the planet.

“It will give me a true yardstick against some other competition on a road course.

“It is going to be an important test for the team with the event coming up at the end of the season.

“After the Iowa test, Ryan Hunter Reay went on to win the race for Andretti, so I guess all the other teams have decided to take the Andretti lead. I hope we can replicate that at Sonoma.”

Apart from a sprinkling of appearances in Indy Lights earlier this year and a recent debut start in a NASCAR Late Model race, Brabham’s career has been on hold in 2015 due to budget constraints.