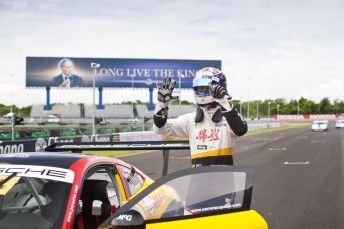 The New Zealander proved unstoppable after surviving two Safety Car periods to take victory in Race 1, which he followed up with a measured lights-to-flag run in Race 2.

Van der Drift quickly opened up a gap on Nico Menzel, Alif Hamden and Craig Baird at the start of Race 1, before the the Safety Car was deployed which wiped out the Kiwi’s 6.9s lead.

Once racing resumed, van der Drift controlled the race from Menzel and Baird, who managed to slip into third with a move on Hamdan. 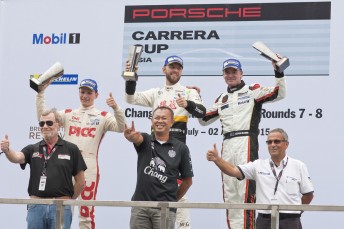 Van der Drift, Menzel and Baird on the Race 1 podium

However, a collision between Hamden, Martin Ragginger and Rodolfo Avila saw the Safety Car called once again.

In the end, van der Drift made no mistakes at the second restart to claim victory from Menzel and fellow New Zealander Baird.

The second race proved to be far more straight forward for van der Drift as he stormed to a comfortable victory over Menzel and China’s Ho Pin Tung, while Baird camera home in fourth.

Evan Chen emerged as the dominant fore in Class B as he completed an impressive double.

Van der Drift holds a 15 point lead in the standings ahead of the Porsche Carrera Cup Asia’s visit to Malaysia’s Sepang Circuit from September 4-6.