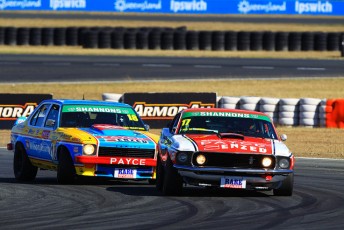 Steven Johnson claimed his third Touring Car Masters round win of the season as he took victory in the day’s two races at Queensland Raceway to complete a clean sweep.

Johnson was forced to work hard for his double triumph at the Ipswich venue as he came through a dice with Andrew Miedecke to claim race two, before withstanding pressure from John Bowe to win the final encounter.

Miedecke secured the lead in the early stages of Race 2 before Johnson regrouped and slipped by at the halfway point of the contest, which he converted into victory from the Chevrolet Camaro driver and Glenn Seton.

Bowe came home in fourth as he recovered from brief contact with Johnson earlier in the race.

Cameron Tilley was involved in the only major incident of the day when Valliant Pacer collided with Keith Kassulke’s XB Falcon at Turn 3.

In a chain reaction Kassulke made contact with Greg Crick with all three drivers escaping the crash unscathed.

Johnson dominated the final race of the weekend behind the wheel of Bowe’s championship winning Ford Mustang.

He took the chequered flag by 0.1s from Bowe with Miedecke third to secure his eighth win from nine starts.

Jason Gomersall won the ProAm class in his iSeek Racing Holden Torana on a count back after tying on points with Tony Karanfilovski for the class victory, with Ian Palmer’s Pontiac Firebird third.

The Touring Car Masters will return to action at the Sydney Motorsport Park Muscle Car Masters event held from September 4-6.

Dream Motorsport driver Randle produced an impressive drive in the first of two 12 lap contests after overcoming Lloyd in a thrilling dice.

Lloyd managed to shoot from sixth on the grid to second at the first corner before passing leader Nick Rowe.

However a charging Randle managed to fight his way through the pack to eventually catch and pass Lloyd on lap eight.

Randle then pulled away from the championship leader before going to record his first win of the season from Lloyd and Luis Leeds.

Lloyd fought back in the final race to extend his championship lead as he took the flag from Randle and Team BRM’s Harry Hayek.

Adam Garwood recorded a comfortable victory in the final Sports GT race as he led home Greg Garwood and Rusty French to complete an all Porsche podium.