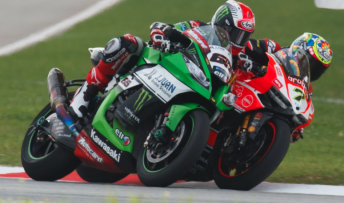 Jonathan Rea and Chaz Davies battle for the lead in Sepang

Jonathan Rea is on the verge of winning a maiden World Superbike Championship title after recording a victory and a second place finish at Sepang.

The Kawasaki rider emerged victorious in Race 1 after coming through a frantic final lap, which saw the lead change hands on three occasions.

The pair overhauled Sykes before engaging in a duel to the finish, resulting in Rea claiming his 12th win of the season after securing the lead at the final corner of the last lap.

Davies was forced to settle for second while Max Biaggi rolled back the years to claim his 71st podium finish in third for the Aprilia Racing Team.

Davies and Rea continued their head-to-head battle in the final race of the weekend with the former coming out on top.

After missing out of victory in race 1, Davies surged into a commanding lead in Race 2 as he looked set to complete a comfortable win.

However, Rea produced a storming final lap to reel in Davies, which provided another thrilling dice to the chequered flag.

The pair made contact at the final corner but Davies just managed to hang on to take the victory.

Davies’ triumph prevented Rea, who needed to finish ahead of the Welshman, from clinching the world championship.

Aprilia Racing Team’s Jordi Torres recorded his second podium of the season in third ahead of the Pata Honda duo of Guintoli and Michael van der Mark.

Rea holds a 144 point margin over Davies in the championship standings with 150 points on offer at Jerez on September 20.