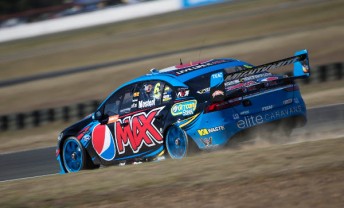 Chaz Mostert has taken out his eighth Armor All Pole Award of the season ahead of the 200km finale to the Coates Hire Ipswich Super Sprint.

Mostert continued his blistering hard tyre form from Saturday, clocking the fastest two times on consecutive laps as the new rubber came out at the end of the 20 minute session.

Mostert moved into the top spot by putting down a 1:09.78s with just under a minute to go before improving by 0.05s on his second effort.

Mark Winterbottom slotted into third after his first lap before jumping Craig Lowndes with his second, which fell 0.10s short of Mostert.

Lowndes and team-mate Jamie Whincup will share the second row after both failing to improve on their second laps.

Shane van Gisbergen had an even poorer run and will start just 23rd.

The entire 25 car field was separated by just 0.87s in another tight session.