Jari-Matti Latvala has won the fastest event in World Rally Championship history when he claimed his third victory at Rally Finland.

The Finn triumphed in an event affectionately known as the ‘Finnish Grand Prix’ at a remarkable average of 125.44kph, eclipsing the previous best of 122.89kph set at the same rally in 2012 by Sébastien Loeb.

Latvala headed Volkswagen Polo R team-mate Sébastien Ogier by 13.7sec after a thrilling duel over rollercoaster gravel roads near Jyväskylä. The win, his second of the season and 14th of his career, promoted Latvala to second in the championship behind Ogier.

Ogier and Kris Meeke both led before Latvala moved to the front midway through Friday. But Ogier refused to allow the Flying Finn to break clear by more than a handful of seconds, and only when he took a chunk out of a wheel against a rock on Saturday afternoon could Latvala breathe more easily.

“This was one of the greatest drives of my life,” said Latvala.

“I’m proud to be a Finn today. I’ve had a tough season but winning my home event is like winning half a world championship.

“I’ve focused fully on this rally for three weeks. After my disappointment at the last round in Poland, I decided my title hopes had gone and concentrated fully on preparing for Finland. It paid off today.”

Ogier, who took the maximum three bonus points by winning the final live TV Power Stage, extended his championship lead to 89 points and could clinch a third title at Rallye Deutschland later this month.

“It was an amazing battle and the show we delivered this weekend was fantastic for the sport. I have no problem being beaten by Jari-Matti when he is this strong,” he said.

Citroën’s Mads Østberg secured his third podium of the season in third, 1min 23.1sec behind Ogier. The Norwegian inherited the place when team-mate Kris Meeke broke his car’s suspension yesterday after hitting a tree.

Thierry Neuville finished fourth in a Hyundai i20, a feat that seemed impossible shortly before Thursday’s start when his team faced a race to rebuild the car after the Belgian crashed heavily in the warm-up stage. 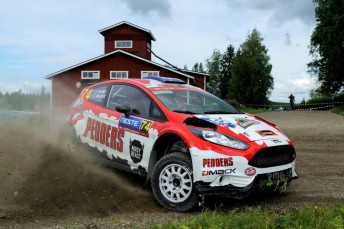 Fifth went to Ott Tänak, who recovered well after driving most of Friday with a broken damper on his Ford Fiesta RS after clipping a rock. Juho Hänninen completed the top six in another Fiesta RS.

Martin Prokop was seventh and headed WRC 2 winner and runner-up Esapekka Lappi and Pontus Tidemand, with Lorenzo Bertelli taking his first point of the season in 10th.

It was the Melbourne driver’s best finish of his debut WRC season, having also contested the Portugal, Italy and Poland rounds. He will miss the German WRC event to prepare for Coates Hire Rally Australia.

“When I started this incredible event I imagined maybe if we had a good, clean run we could finish in the top eight,” said Pedder.

“So to finish fifth, then to learn you’ve finished fourth, is actually quite unbelievable.”

The first pure asphalt round of the season comes next, when Trier hosts ADAC Rallye Deutschland on 20 – 23 August.