Latvala pulls ahead in Finland

Latvala pulls ahead in Finland 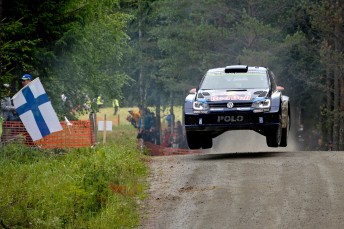 Latvala closes-in on victory in Finland

With only two tests and less than 30km remaining on Sunday, Latvala leads by 13.2sec after a brave attack in treacherous conditions gave him the upper hand over Ogier and left the Finn on the verge of a third victory in his home rally.

The two have dueled for supremacy since Thursday night, and the margin never rose above a handful of seconds. Latvala began Leg 2’s eight tests covering 131.04km with a 2.6sec lead, and eked it out to 3.0sec after the duo claimed two stage wins each during the morning.

Despite torrential rain, Latvala attacked in the 21.14km Jukojärvi and more than doubled his lead as Ogier clipped a rock with his Polo R. Fearing a puncture, the Frenchman eased his pace and it gave Latvala the break he needed.

“I knew it was time to attack this afternoon and it went well, despite the rain,” said Latvala.

“That was the turning point of the rally. You have to take risks at the speeds we’re at here. Some sections were wet and some dry, and it wasn’t easy when you’re at the maximum.”

Neuville’s Hyundai i20 ran intermittently on three cylinders this afternoon, a problem traced to a faulty sensor. The Belgian was 52.6sec ahead of Ott Tänak, who climbed from 10th to fifth in a Ford Fiesta RS restored to health after yesterday’s damper problems.

Dani Sordo dropped from sixth to 11th after going off for five minutes, while Robert Kubica rolled heavily 300 metres from the finish of the final stage. 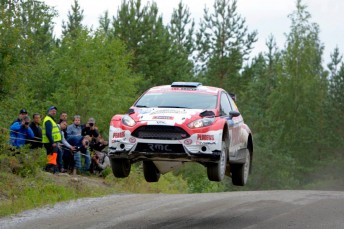 Another positive day for Australia’s Scott Pedder who sits fifth in the WRC2 division and is 15th overall.

“There were sections today that actually felt a lot like the roads we use in Canberra, a little rough, a bit rocky in places. Still very fast, but not the smooth sweeping roads we had yesterday,” said Pedder.

With the bulk of the rally’s competitive distance now behind him Pedder and Moscatt have the final Leg’s two Special Stages to contend with, a back-to-back pass over the Myhinpää, totaling just over 28 kilometres.

“It is a short day but the stage we use is very much like Ouninpohja from yesterday, very fast, with the big jumps and crests. So there is still plenty that could catch us out if we don’t keep that concentration level up and stay committed, that’s the plan,” Pedder added.

Sunday’s second pass of Myhinpää will be the live TV Power Stage with bonus points to the fastest three drivers.