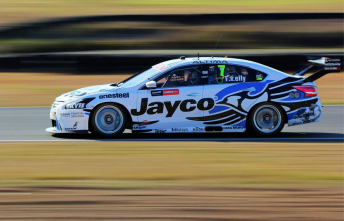 Kelly was heard to scream ‘why, why, why me?’ on his team radio as he parked on the infield with three laps remaining.

He then unleashed a succession of repetitive expletives as he thumped the steering wheel of his Altima, all captured on live television.

The former Bathurst winner had been running in 16th place at the time of the failure after struggling for speed throughout the race.

Enjoying his most competitive season since starting his own team six years ago, Kelly entered the race 11th in points, but drops to 13th as a result.

“Initially I thought it was a header pipe because it got really loud, we’ve had that before,” he recalled post-race.

“So I was on the radio to the guys trying to find out whether there was any information on the telemetry for oil pressure.

“They thought it was safe to press on and that it was in the exhaust system but it clearly wasn’t because it let go properly.

“It was a shame to be so close to the finish and have something like that happen.

“You work so hard for every single championship point out on the track and you can lose 150 points just like that which is a bit rough.

“We have to work out how to set the cars up better and earn the points back again.”

Having qualified fifth and finished sixth in the soft tyre Race 19, Kelly battled for pace with both compounds today.

“The car itself was alright, probably not as good as yesterday on the softs but it was absolutely terrible on the hards so we just had to survive,” he added.

“It was almost like we had lost a damper or something because we were all over the place. It wouldn’t turn and was bouncing around quite a lot.

“It’s so close out there we don’t need much to jump us up in the points standings.

“Hopefully when we get a few new bits and pieces on the cars we can make that jump. It can’t happen soon enough.”