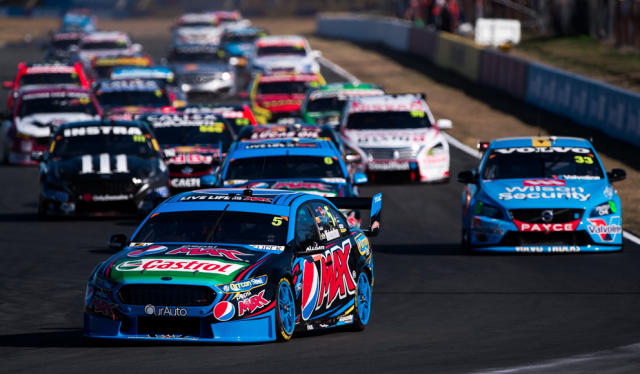 Fast starter Mark Winterbottom added to his V8 Supercars Championship lead with a commanding victory in Race 18 at Queensland Raceway.

Starting alongside pole-sitting team-mate Chaz Mostert, Winterbottom made a trademark getaway to lead into Turn 1.

Winterbottom then benefitted from an opening lap dice between Mostert and Scott McLaughlin to build a lead he would never lose, scoring his first Ipswich win since 2008.

“Starts are everything and to get to Turn 1 first lets you dictate the race,” said Winterbottom.

“I looked in the mirror and there were cars into each other.

“I’m still struggling with the car though, so hopefully we can tune it up for the next one.”

McLaughlin took the flag 4.5s adrift in second to score the first podium of the year for Garry Rogers Motorsport and Volvo.

Craig Lowndes completed the podium a further 6.8s behind McLaughlin, having been the late beneficiary of a spirited race long battle between Shane van Gisbergen and Mostert.

Van Gisbergen snuck through on Mostert in the early laps and subsequently found himself fending off the faster Ford for the remainder of the race.

Lowndes leap-frogged the pair when Mostert tagged the rear of the Tekno Holden at the start of the penultimate lap, sending the Kiwi sideways on the front straight.

“I raced him pretty hard,” admitted Mostert post-race. “He rubs and races and I rub and race. There was overlap and I wasn’t going to back out. That’s the way it goes. We raced hard.”

“I just did all I could to hold him off and had no tyres left at the end,” added Van Gisbergen. “It was an awesome race. It was a shame Craig got us at the end, but it was good fun.”

James Courtney, David Reynolds, James Moffat and Jamie Whincup filled sixth through ninth, finishing the race on the tail of the podium battle.

Third placed qualifier Andre Heimgartner had been the biggest loser in the hectic opening stages, eventually finishing 15th after struggling to maintain his place among the front-runners.

A Turn 1, opening lap incident unfolded at the back of the field that saw Todd Kelly’s Nissan tagged into a spin by Dale Wood.

David Wall slowed in the melee and was subsequently spun by Bright, who was immediately out of the race with front-end damage.

“When Todd went off Walley seemed to hit the brakes,” Bright lamented. “I thought we were all going to get through ok on the inside.”

Also on the retirements list was Scott Pye, who pitted at the halfway mark with a split oil cooler tank while running 10th in the DJR Team Penske Ford.

Winterbottom’s championship lead over Lowndes now sits at 259 points ahead of the afternoon’s second 60km sprint.