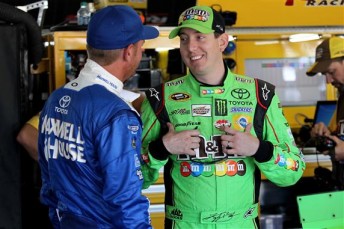 Kyle Busch is all smiles with pole at Pocono

Kyle Busch’s hot form in NASCAR has now followed through to qualifying with the Toyota driver taking the pole position at Pocono Raceway.

Busch, who has won four of the past five races, will start alongside defending series champion and points leader Kevin Harvick.

It is the Joe Gibbs Racing driver’s second career pole win at Pocono, and his first of the season. It’s also the team’s third-straight pole after Carl Edwards took back-to-back top starting posts at New Hampshire and Indianapolis.

Busch missed the opening 11 races after leg fractures suffered in a crash in the Xfinity race at Daytona in February. He has to finish in the top 30 in points before the 26th race to qualifying for the Chase of the Sprint Cup. He’s only 23 points out of the top 30.

Joey Logano, Austin Dillon and Tony Stewart round out the top five.

VIDEO: Kyle Busch talks about his pole at Pocono