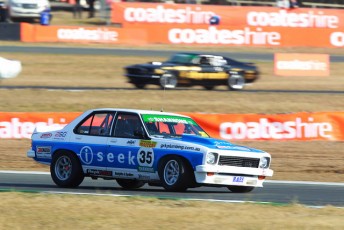 Jason Gomersall eclipsed John Bowe and Steven Johnson to set the pace in practice for round five of the Touring Car Masters at Queensland Raceway.

The Queenslander’s 1:16.78s claimed a new practice lap record with the effort 0.2s quicker than the best achieved by Johnson, who topped second practice.

Johnson, driving a Ford Mustang raced by Bowe last year, showed no signs of jet lag after only returning to Australia late this week following his recent trip to the Spa 24 Hours.

Charlie O’Brien was involved in the only incident of note when his car sparked a grass fire after coming to halt at the side of the track due to a broken throttle cable in Practice 2.

The Shannons Queensland Tourist Trophy continues on Saturday with qualifying before a 12 lap race.

CAMS Jayco Australian Formula 4 Championship leader Jordan Lloyd remains the man to beat as he topped the times in both practice sessions for the new junior single seater category.

Heavy fog delayed the start of opening practice, but it failed to hamper Lloyd as he recorded the best time of the day in the first session with a 1:11.71s.

Luis Leeds was fourth fastest ahead of Team BRM’s Harry Hayek and AGI Sport’s Will Brown.

It proved to be a difficult day for Jack Sipp as he suffered a mechanical issue which forced him out of second practice.

“It was a bit of a water hose problem,” said Sipp.

“A clamp came off and caused it to over heat which is not too good for the engine, so we’ve got to put a new one in and hopefully we can bounce back tomorrow.”

Formula 4 will return to the track on Saturday for qualifying followed by a 12 lap race.

Tony Warren secured pole position in the Sports GTs after posting a 1:15.38s effort behind the wheel of his Mitsubishi Evo VII.