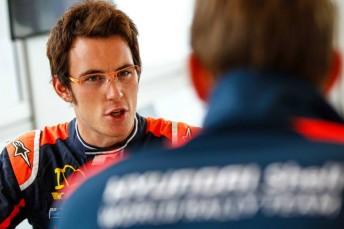 Neuville did start the event

Hyundai’s Thierry Neuville has been involved in a heavy crash during shakedown for Rally Finland.

The Belgian left the road at high speed and tore through at least two trees before coming to stop against an even larger piece of the scenery.

“It was quite a huge off. I arrived at the corner at about 160kph and went off at about 80kph. There was no escape because the trees were very close to the road,” he said.

“The grip was much less than I expected. I saw the braking lines from the other boys and tried to adapt. But I was too far off line and with the camber of the road I couldn’t take the apex and went straight off.

“I pulled the handbrake to try to go backwards into the trees. It’s a fifth gear left corner but I came in sixth. Straight away from starting to brake it was full lock with the steering but I couldn’t get round.”

His car was repaired in time for the opening Super Special Stage of the event which was won by Sebastien Ogier, with Neuville just 2.6-sec behind in eighth.

The first full leg of competition will get underway later today.