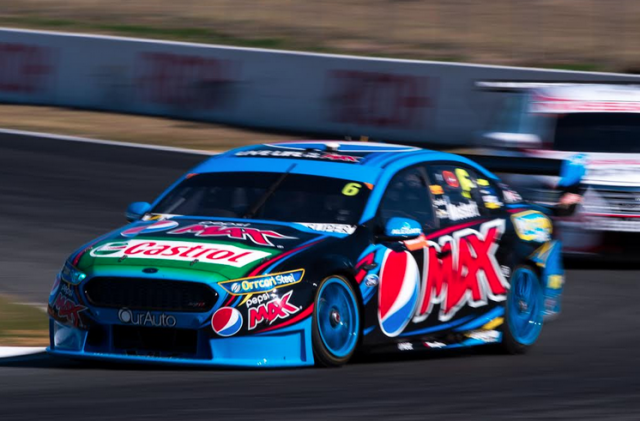 The Pepsi Max Ford shot to the top of the order with 10 of the 60 minutes remaining, recording a 1:09.48s on soft tyres.

That effort put him 0.5s clear of previous pace-setter Scott McLaughlin, before Tim Slade closed the margin to 0.35s in the final minutes.

After a set-up change, Mostert went out for a second run on his softs but fell 0.2s short of his own earlier effort.

The #6 Falcon also proved one of the fastest across the day on the hard rubber, leaving Mostert highly pleased with his day’s work.

“We ran on hards most of the day and pre-empted what we needed to do with the car on the soft,” explained Mostert, having been fourth in Practice 1 without using the softs.

“I think we missed it a little bit on the first run and then tuned it up a bit for the second, but the softs as they go away, they deteriorate.

“We’re pretty happy though. The car is brilliant, it probably just needs a tune up here and there.”

Slade and McLaughlin held second and third to the chequered flag ahead of Todd Kelly, Ash Walsh, David Reynolds, James Courtney, James Moffat and Will Davison, who all ended the session on the soft tyres.

Red Bull’s Craig Lowndes and Jamie Whincup were next, both on the hard tyres, while Mostert’s team-mate Mark Winterbottom was even further back in 16th.

Locking a right-front tyre, Pye elected to turn hard left at the final right-hander, skipping through the gravel trap before rejoining undamaged at Turn 3.

The day’s only red flag was brought out by Dale Wood, who went off at Turn 3 and momentarily parked his #21 Brad Jones Racing Holden beside the tyre barriers.

The Ipswich circuit provided typically challenging conditions for teams and drivers to tune their cars, with the track surface noticeably greasy during the afternoon’s warm conditions.

A third and final practice session will take place from 1000 local time Saturday prior to qualifying.