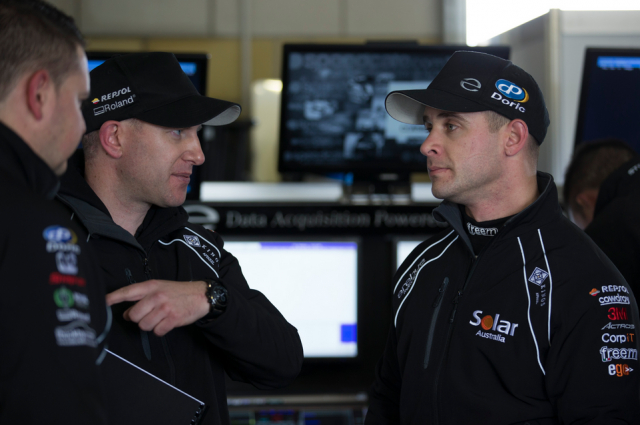 McDougall and Walsh earlier this season

McDougall had performed the dual roles of technical director and race engineer to Ash Walsh before taking medical leave following Winton in May.

Little, who joined Erebus as a consultant earlier this year amid a wide-scale restructure, will now focus on lifting the team’s overall performance.

McDougall had been one of the squad’s longest serving members, returning from a stint in Europe to join SBR in 2005 as a data engineer for Marcos Ambrose.

He later worked as a race engineer for James Courtney, Alex Davison and Tim Slade and was elevated to the technical director role last year.

“After needing surgery (for a congenital heart condition) I had a lot of time to think about my health, career and future,” McDougall told the V8 Supercars website.

“Ultimately the timing was right for me to complete my recovery with a holiday and move on from Erebus.

“Whilst it was a tough decision, I leave proud knowing I helped them achieve some of their goals by overseeing two victories as technical director.

“I wish them all the best for the future I am and excited to discover my next challenge in motorsport.”

Walsh heads into this weekend’s Coates Hire Ipswich Super Sprint boosted by a rookie test day at Queensland Raceway last week, where he continued to acclimatise to the Mercedes-Benz E63 AMG.