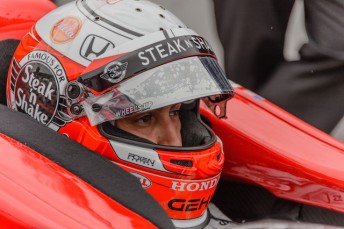 Second generation racer Graham Rahal says he must qualify well at Mid-Ohio this weekend in order to keep his IndyCar Series flame flickering.

A home race for Rahal, the Mid-Ohio sports car course is traditionally difficult to pass on, making a prominent grid position a crucial part of the weekend.

“It will be extremely important for us to qualify well, but we haven’t really had too many issues this year,” Rahal said during an open press interview organised by IndyCar.

“I don’t want to start any further back than the top six to give ourselves a realistic chance of victory.

“At the same time we’ve put ourselves in some pretty bad spots before, like the Grand Prix of Indy (in early May), and worked our way through it.”

Rahal says that the fuel efficiency of the Honda engine in his Rahal Letterman Lanigan Racing machine will be an advantage at Mid-Ohio, a circuit where his highly acclaimed dad Bobby Rahal cut his teeth.

“The fuel efficiency (of the Honda engine) is tremendous. That’s really helped us in races,” Rahal said.

“Mid-Ohio always tends to turn into a fuel race. If that’s the case, again, I feel very positive about the Honda over the Chevy.

“It’s been a frustration, a disappointment. It definitely makes our lives a little bit harder.

“We definitely want to put ourselves as far forward as we can.”

Rahal is one of 13 drivers who remain in mathematical contention for the title ahead of the double-points closing round at Sonoma next month.

Ganassi’s Kiwi superstar Scott Dixon is third in points, only six behind Rahal and has the excellent record of recording five wins at Mid-Ohio, three of which have been over the last four years.