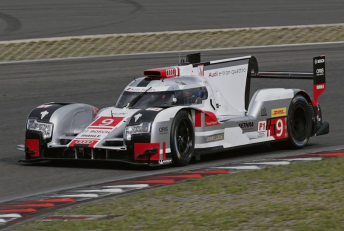 Audi topped the times in a two-day open test at the Nurburgring ahead of next month’s FIA World Endurance Championship round at the German circuit.

LMP1 manufacturers Audi, Porsche and Toyota each fielded one car during the test, with the #9 R18 e-tron quattro, driven by Andre Lotterer, Benoit Treluyer and Loic Duval posting a benchmark 1:37.458 lap time.

Audi clocked the session best time in dry running on Tuesday with its Le Mans specification R18, which the team will run for the remainder of the season.

“It was a good test for us,” said Team Principal Andreas Seidl.

“We have been running a few new items and preparing for the six-hour race at the end of August. Because the Nürburgring is new on the WEC calendar, we had no data from before.

“For the drivers it was an important experience too to be here with the 919.”

Toyota continued to struggle for outright speed as its TS040 Hybrid was more than two seconds adrift of the pace in third.

Nissan was absent from the paddock with the Japanese manufacturer electing to conduct a private test with its GT-R LM Nismo at the Circuit of the Americas in the coming days.

The Porsche Team Manthey squad set the pace in the GTE Pro class, while the #88 Abu Dhabi Proton Competition Porsche 911 RSR was the top runner in GTE-Am.

The fourth round of the FIA World Endurance Championship will be held at the Nurburgring from August 28-30.