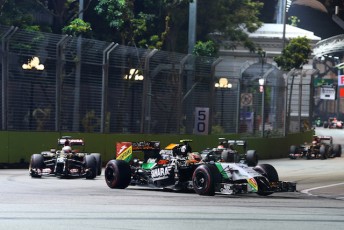 A number of modifications have been made to the Marina Bay street circuit, host of Singapore’s celebrated night F1 grand prix from September 18-20.

The changes have been approved by the FIA as part of enhancements to the new Civic District.

These reconfigurations will see the right-hand Turn 11 re-aligned to sit tighter with the left-hand side of Fullerton Road for a slightly slower corner speed compared to 2014.

The left-hand Turn 12 will be slightly modified which will see drivers enter the left lane of Anderson Bridge, before accelerating towards Turn 13 at 200kmh – a similar speed to last year.

At the Turn 13 hairpin, the space will be widened by one metre, potentially providing more overtaking opportunities.

The changes ride on the back of a number of key enhancements to Singapore’s Civic District and tie-in with the city-state’s 50 anniversary of independence.

A new 220m Jubilee Bridge which links the Merlion Park to the Esplanade promenade has also been incorporated into the Circuit Park.

Colin Syn, Deputy Chairman of Singapore GP Pte Ltd, said the work was a positive for the venue.

“It’s a win-win situation that the development of the new arts, culture and lifestyle precinct will provide an upgraded experience, but also potentially make for closer racing at this year’s F1 Singapore Grand Prix,” Mr Syn said.

“We take pride in ensuring our event is one of the best on the calendar, and this will only add to the excitement, on top of the off-track entertainment planned for September 18 to 20 – which already includes Pharrell Williams, Maroon 5 and Bon Jovi.”