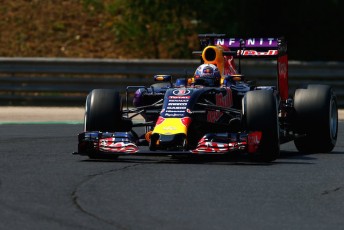 Daniel Ricciardo is likely to be hit with a second engine penalty of the season at upcoming races after suffering another engine failure at the Hungarian Grand Prix.

The Australian, who claimed his first podium of the year in Sunday’s race, suffered yet another power unit failure in Friday practice, leaving him with just one engine for the remainder of the campaign.

Blighted by power unit issues this term, Ricciardo has already exceeded his permitted four engines for the season earlier this year, which saw him cop a 10 place grid penalty prior to the Austrian Grand Prix.

Fearing another failure with power circuits Spa-Francorchamps and Monza next up on the calendar, Red Bull is already weighing up the possibility of incurring another penalty for the use of a sixth engine.

“Engine five is all he’s got for Fridays, Saturdays and Sundays now so inevitably, probably in the next couple of races, we’re going to have to take another unit.

“Whether that’s with one driver or both, we’ll have to have a look at the numbers over the coming week.”

Red Bull avoided any further engine dramas at the Hungaroring as they went on to record a double podium finish with Daniil Kvyat second and Ricciardo third.

While a heavily updated engine is not expected until October’s Russian Grand Prix, Horner says upgraded pistons have improved the Renault engine’s reliability.

“The engine that blew up on Friday was the same spec as the Bahrain engine, but since they’ve put the new piston in it seems to be behaving a little more reliably,” added Horner.

“Hopefully that will continue in the second half of the year.”