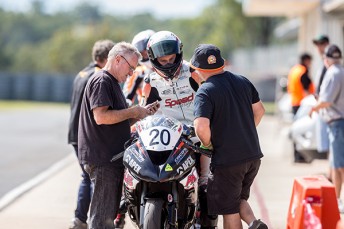 Australian rider Alex Phillis has earned a surprise call-up to the Italian-based Grillini Kawasaki team for the final four rounds of the World Superbike Championship.

Phillis, the son of the highly decorated Australian two-wheel champion Robbie Phillis, will kick off his stint on the world stage at the Malaysian round this weekend before heading to Spain, France and Qatar.

The offer to join the Italian outfit has caught the youngster by surprise.

“It’s a really exciting thing to happen and quite out of the blue,” he said.

“At the moment it is taking a while to sink in, but hopefully we get to the track, get everything sorted and by Friday be ready to ride.

“This is going to be the hardest learning experience I have ever had on a motorcycle.”

Apart from facing the challenge of stepping up to World Superbike level, Phillis is mindful that he will mount and unfamiliar bike that will present fresh set-up challenges.

“It’s a very different bike to anything I have ridden in the past – I have been on a ZX10 in the past, but this bike is a lot more advanced on the technical side,” he said.

The latest development comes after Phillis gained a wildcard entry in the Supersport class at the World Superbike round at Phillip Island earlier in the year when he finished 17th on a Honda CBR800RR.

Since then Phillis has eased into the Supersport class in the 2015 Yamaha Motor Finance Australian Superbike Championship presented by Motul Pirelli.

“The program is awesome and we get plenty of track time,” he said.

“We have two decent length races on the Sunday which is good and all the people around the paddock have really enjoyed this years’ series.”