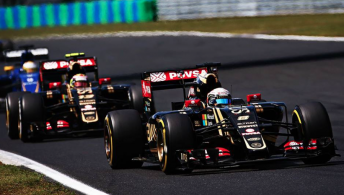 The pair have now picked up six points each this season following incidents during Sunday’s race.

Article 4.2 of the FIA sporting regulations states that any driver, who collects 12 points over a 12 month period will be suspended from the next event.

Maldonado was handed two points and a drive-through penalty for his involvement in a collision with Force India’s Sergio Perez.

Grosjean, who finished the Hungarian Grand Prix in seventh, picked up two points as a result of an unsafe release in the pits by his team.

The Frenchman was the last driver to incur a race ban for his actions in causing a multiple car crash at the start of the 2012 Belgian Grand Prix.

Hamilton collected two points for his clash with Daniel Ricciardo in the closing stages of the race.

Verstappen sits on five penalty points for the season after he was issued with three points for not staying above the required time set by the FIA under the Safety Car.

Second place finisher Kvyat was given two points for gaining an advantage by leaving the track.