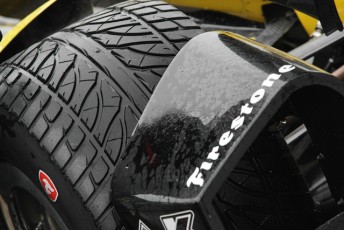 A new rain tyre which has been developed through series supplier Firestone will become available from IndyCar’s Mid-Ohio round this weekend.

Experimental compounds were put through extensive wet friction testing before the final specification tyre was given the green light.

The year-long development process saw the tyre meet safety, reliability and race worthiness standards on a range of wet surfaces.

Defined by a silver stripe, the tyre will join the series after the previous specification was introduced in 2014.

“We took all of those tests and boiled it down to which compound performed the best and that’s the compound we picked for this rain tyre,” Harrigle said.

“We optimised the tyre to better fit wet conditions. We did that virtually through 48 different simulation cases on the front and rear tyres and came up with the construction we wanted to use.

“A silver stripe was added to the sidewall so it’s easier for the fans and teams to identify who is on rains, who is on primaries and who is on alternates.”

Harrigle said he expects rain tyre wear to be about the same as the previous rain tyres, which had a softer compound.

“A lot of it is surface dependent,” he said.

“It will be a learning process for teams and drivers. The biggest challenge for us is the concrete, which is smooth.”

The tyres, however, may not see duty this weekend with forecasters predicting fine conditions for Mid-Ohio, the third last round ahead of Pocono and the double-points closing race at Sonoma.