Briton Alex Lynn has stormed back into the spotlight after nailing his maiden feature race win in the GP2 Series at the Hungaroring.

Lynn had benefitted from the right tyre strategy from his DAMS outfit to beat team-mate Pierre Gasly and Sergey Sirotkin.

After landing pole, the Williams test driver led for most of the 37-lap journey.

Meanwhile in the sprint race, Nobuharu Matsushita established a comfortable victory in the cooler conditions.

The Japanese driver lead home Vandoorne in a result which realised the first quinella for ART Grand Prix since Sam Bird and the late Jules Bianchi at Monza in 2010.

Rapax pilot Sirotkin scored another podium finish to edge closer to second in the championship.

Vandoorne has moved to 194 points, extending his advantage after Alexander Rossi failed to score any points, seeing him left on 105 with Sirotkin third on 103.

It proved another uncompetitive weekend for talented Kiwi and 2012 GP2 Series champion Mitch Evans (Russian Time) who was mired in 17th and 22nd in the twin races.

Fellow New Zealander Richie Stanaway also endured a difficult weekend behind the wheel of his Status Grand Prix machine finishing 21st and 13th across the weekend.

The series moves to the Spa Francorchamps circuit in Belgium next month. Kirchhofer moved into the podium position after overtaking Arden International driver Emil Bernstorff who would eventually finish second in the 22-lap affair.

The race was interrupted early on after a spectacular crash which saw Zaid Ashkanani fly over the back of Nissan pin-up Jann Mardenborough which brought out the Safety Car.

In the second heat, Kevin Ceccon scored another victory in the sprint race.

Some desperate scrabbling early on saw Bernstorff make contact with Antonio Fuoco with both ending in retirement.

Fuoco’s Carlin team-mate, Australian Mitch Gilbert soldiered on to finish 10th in the 16-lapper after finishing one position lower in the opening race.

The championship sees Ghiotto move to 121 points, 23 clear of Kirchhofer with Ocon 25 points off the lead in third. 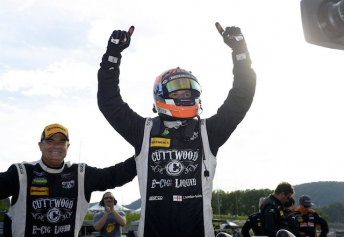 Tom Kimber-Smith and Michael Guasch took the PR1/Mathiasen Motorsports squad to its third win of the season in the Northeast Grand Prix at Connecticut’s Lime Rock Park.

The No. 52 Oreca FLM09 took the sprint win, following its success at Daytona and Sebring, Kimber-Smith slipped by Bruno Junqueira with 35 minutes left before taking the chequered flag.

Renger van der Zande and Mirco Schultis were a distant third in the #8 Starworks Motorsport Martini.

The BMW had 3.5s to spare in the 2:40 minute race ahead of Jeroen Bleekemolen in the #33 ViperExchange.com Dodge Viper SRT GT3-R the Dutchman scored with Ben Keating.

The series takes to the Road America circuit for the next round on August 9.

Australians Nick McBride and Nick Foster have claimed top 10 finishes in the Porsche Carrera Cup Italy/France round at Spa-Francorchamps.

McBride was the star Australian, finishing eighth in the 15-lap affair, two places ahead of Foster in 10th.