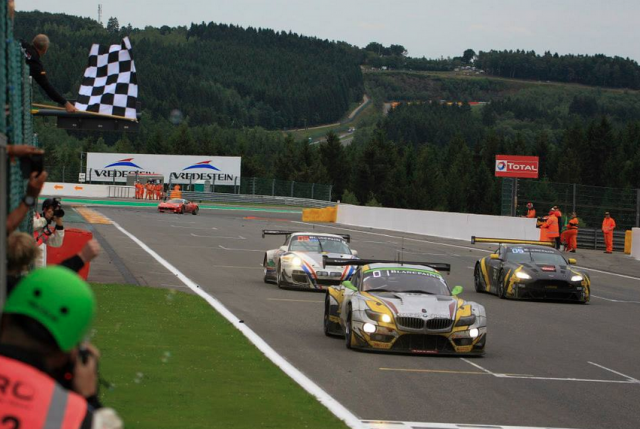 Catsburg takes the chequered flag for victory at Spa

The #46 BMW took control of the race in the 19th hour when its sister #45 Z4 of Dirk Werner, Augusto Farfus and Maxime Martin retired with an engine failure.

“This win means everything to the Marc VDS Team,” beamed Paltalla, with the GT success adding to 15 previous Spa victories in different eras for BMW.

“This is what we’ve been working for all this time. This is the sixth time I started for Marc VDS here, and we’ve come really close before.” 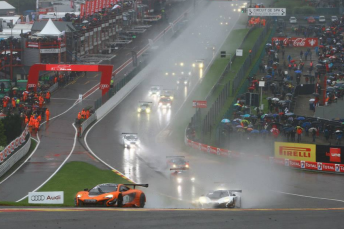 The #6 Phoenix Audi of Mike Rockenfeller, Andre Lotterer and Marcel Fassler completed the top five after a costly spin and series of track limits penalties in the morning running.

The highly fancied #1 WRT Audi meanwhile managed just 21st after a crash for Laurens Vanthoor during the night.

Wet conditions contributed to a carnage-strewn race, with a total of 10 Safety Cars required throughout the 24 hours.

Shane van Gisbergen’s #58 Von Ryan McLaren led the early stages in the hands of Kevin Estre, but would fall foul of the carnage while running inside the top 10 at the halfway mark.

Contact with the #333 Rinaldi Ferrari sent Van Gisbergen cars to the pits for repairs, losing 10 laps. Further issues for the Von Ryan entry saw it fail to take the finish. It was classified 29th, 79 laps from the lead.

There was joy for Australian Liam Talbot, who shared the #111 Kessel Ferrari to third in the Am Cup category and 19th overall.

Compatriot Jonathan Venter’s #44 Oman Aston Martin was meanwhile classified 30th, despite an engine failure in the 22nd hour that prevented the Vantage from seeing the finish. 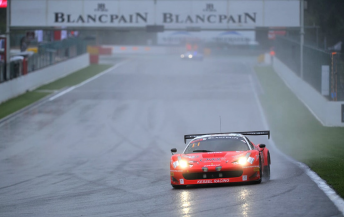 It was a rough day for Lamborghini, with both Huracans retiring, and Nissan, which saw its erstwhile Pro Cup leading trio of Alex Buncombe, Wolfgang Reip and Katsumasa Chiyo 15th after a series of delays.

Just one of the four Bentleys took the chequered flag, with driver Andy Meyrick requiring a stint in hospital after a heavy accident.

Alex Zanardi’s Spa 24 Hour debut ended with a mechanical issue during the final hour for the Roal BMW he shared with DTM drivers Timo Glock and Bruno Spengler.

Also left to lick its wounds was Rowe Racing, running at the front with its Daniel Juncadella, Stef Dusseldorp and Nico Bastian entry for much of the going before a late engine failure.