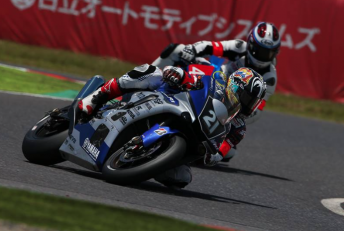 The TSR Honda squad led by Australian Josh Hook, Kyle Smith and Dominique Aegerter were more than minute behind in second spot, having diced for the lead during the race.

“It was a hard race but to come away with second position is awesome,” said 22-year-old Hook from Taree.

“Everyone at the team has been working really well, I’m stoked to finish second, I’m over the moon.” It proved to be an eventful run to victory for the Yamaha Racing Team after losing their pole position advantage at the start due to a slow getaway from Nakasuga.

Australian two-time MotoGP world champion Casey Stoner, on his competitive return to motorcycle racing since retiring in 2012, emerged in the lead in the early stages for Musashi Harc Pro Honda.

However, his race came to an abrupt end when a stuck throttle sent him into a nasty crash at the hairpin, which resulted in retirement with just an hour and 10 minutes completed.

Stoner was later diagnosed with a fractured Tibia and broken Scapula.

The accident ultimately handed the works Yamaha squad the lead after overcoming the TSR Honda crew.

Aided by stints from Smith and Espargaro, the Yamaha team built up a healthy lead although the complexion of the race soon changed.

The squad’s third rider Nakasuga incurred a 30 second penalty for overtaking under yellow flags which saw the TSR Honda inherit the lead.

Despite the penalty, Yamaha fought back once again to surge back in front after two strong stints from Espargaro and Smith.

A late Safety Car period put the race victory in doubt but Smith made no mistakes in the final 10 minutes to claim the manufacturer’s first win at the event since 1996.

The Suzuki Endurance Team of Vincent Philippe, Anthony Delhalle and Etienne Masson came through to finish fourth despite a late pit stop.