Stoner in big crash at Suzuka

Stoner in big crash at Suzuka 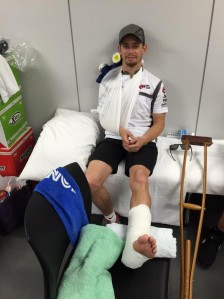 Stoner in the medical centre

Casey Stoner has suffered arm and leg injuries after being involved in a heavy accident when his throttle stuck open while leading the Suzuka 8 Hours.

The crash occurred approaching the hairpin section of the circuit 69 minutes into the race with the Safety Car immediately called onto the track.

Approaching the corner, Stoner got onto the grass and he dropped the bike. He went across an inside gravel trap and through a padded barrier, with the machine torn apart and laying in the middle of the circuit.

Stoner, who was on the grass verge, crawled away as circuit workers came to his aid. Within moments he was tendered to by circuit medical staff. He later appeared back in the garage with his right arm in a sling and lower leg bandaged.

The two-time MotoGP World Champion Tweeted: Well my #Suzuka8H ended spectacularly! Stuck Throttle = Broken Scapula + Fractured Tibia and a few more tweaks. Sucks! Sorry to my team Michael van der Mark, Takumi Takahashi and the entire crew, they have worked too hard to end it like that. Thank you guys!”

Stoner was making his first appearance in the endurance classic and his first serious motorcycle race outing since retiring from MotoGP back at the end of 2012.

Stoner, who had qualified the Musashi Harc Pro Honda third on the grid, took over from Takumi Takahashi 15 minutes prior to the crash.

He was heading fellow Australian racer Josh Hook when the accident occurred.