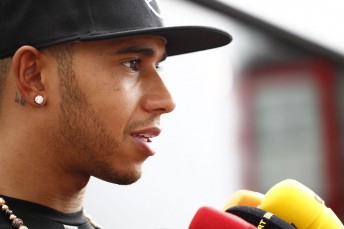 Lewis Hamilton set the benchmark in a heavily interrupted Friday practice for the Hungarian Grand Prix.

The reigning world champion topped the times in both 90 minute sessions at the Hungaroring, with his personal best 1:23.949s arriving on soft tyres in the afternoon hit-out.

Hamilton proved to be 0.3s quicker than the Red Bull of Daniil Kvyat with his team-mate Daniel Ricciardo third, despite the Australian suffering an engine failure which brought out the red flags late in Practice 2.

While Hamilton emerged as the man to beat, Force India created the headlines with the team withdrawing their cars from second practice after a nasty crash for Sergio Perez in the opening session. 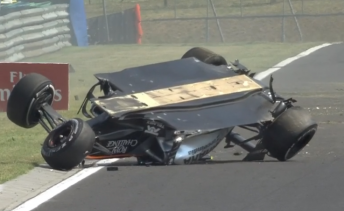 Perez suffered a suspected rear suspension problem which pitched the Mexican into the barriers after Turn 11 resulting in the car rolling over.

The former McLaren driver escaped the incident unscathed but the Silverstone outfit elected to withdraw the sister car of Nico Hulkenberg from Practice 2 as a precaution.

The team will investigate the issue as they search for a resolution before Saturday’s third practice session.

The Finn brought out the red flags for a second time in FP1 when he suffered a front wing failure.

Toro Rosso’s Carlos Sainz was sixth fastest ahead of Sebastian Vettel, who encountered two uncharacteristic spins in the second session.

The Williams pair of Valtteri Bottas and Felipe Massa rounded out the top 10.

However, it proved to be an eventful day for Lotus with the team unable to make the start of Practice 1 due to a payment dispute with tyre manufacturer Pirelli.

The Italian firm withheld the team’s allocation of tyres until just minutes before the start of the session, which resulted in Pastor Maldonado and test driver Jolyon Palmer clocking 13 laps between them.