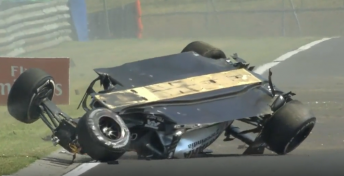 A wishbone failure caused this shunt for Sergio Perez

Force India is hopeful a suspension modification will avoid a repeat of the failure which led to Sergio Perez’s roll in Friday practice for the Hungarian Grand Prix.

The Silverstone outfit withdrew both its cars from Friday’s second practice session when a rear wishbone issue in Practice 1 saw Perez suffer a roll after colliding with the barriers at speed on the exit of Turn 11.

An investigation into the cause of the incident was launched by the team immediately.

Force India CEO Otmar Szafnauer believes a fault in the rear wishbone caused the crash and is confident a suspension modification will see the team return to action in Practice 3.

“It looks like a lower wishbone had a buckle,” Szafnauer told Fox Sports.

“If that’s the case we’ve got to stiffen it. We’ll wrap it with carbon to make it stiffer – we’ve got the capability here on site, and we’ll do the same back at base and test it, and we should be OK for tomorrow (Saturday).”

Perez admitted the accident had shocked him but the 25-year-old remains upbeat about his chances at the Hungaroring this weekend.

“It was quite a dramatic accident,” said Perez after practice.

“The impact was not that bad, but then I rolled over and I got a bit scared.

“Getting out of the car was quite a challenge in that position, but thank god nothing happened and I’m here for tomorrow (Saturday).

“I still believe we can have a strong qualifying session so I’m optimistic for the rest of the weekend.”