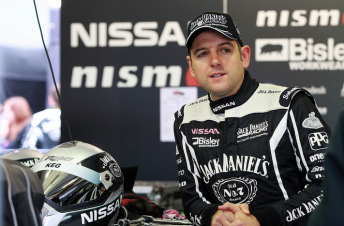 The Nissan is one of five V8 Supercars which will feature in three 30 minute demonstration races ahead of a full championship event at the circuit in 2016.

While Nissan will use a car from its race fleet, Red Bull, Prodrive, Erebus and Volvo are sending spare chassis for drivers Craig Lowndes, Chaz Mostert, Will Davison and Scott McLaughlin respectively.

All five will be air freighted out of Sydney on the Monday night after the Coates Hire Ipswich Super Sprint, ready for the August 5-7 KL GP.

Each team will also bring five crew and a container of spares to run their cars, while three sets of soft tyres per entry and the required fuel has already been shipped to the venue.

V8 Supercars has promised to tightly control data gathering so that the five teams chosen for the demo do not enjoy a distinct advantage ahead of next year’s championship event.

Kelly meanwhile says he’s excited to sport the JD hues, which he raced with for seven years before the sponsor scaled back to a single car in 2015, and is promising action-packed demo races.

“I’m back in the Jack Daniel’s car which Rick is not too happy with, because I’ll be flogging it around the streets of KL,” smiled Kelly.

“It’s a miniature race between the five manufacturers, so there’ll be five drivers and cars over there for the event and it’ll be on for young and old.

“I’m still waiting to find out whether they’re going to take Bargs (Jason Bargwanna, V8 Supercars Investigating Officer) or any of the stewards over, so there might be a few black marks up the side of Rick’s car.”

In other Nissan news, today marks the last with the team for media manager Grant Rowley, who has elected to pursue other sporting opportunities after 12 years in the V8 Supercars paddock.

Rowley’s time in the sport included working as the founding editor of Speedcafe.com between 2009 and 2013. We wish Grant the best of luck in his new venture.