The IndyCar field will run fresh technology that will see LED panels mounted on the sides of each car which will project information including real-time running position.

Mid-Ohio’s August 2 race will see the panels, that will also show pit stop times and when the push-to-pass feature has been utilised, in active competition for the first time.

First tested at Barber Motorsports Park earlier this year, the 8-inch x 7-inch panels will be attached to either side of the airbox.

“This project was about how we can enhance the at-track experience for fans at our events and allow them to understand more of what’s going on,” Derrick Walker, the series president of competition and operations, said.

“If you’re not in the line of sight of a video screen or a scoring pylon, it’s sometimes hard to know who’s doing what on the racetrack.

“It was a natural to do the numbering system and we’re confident this will help get our fans more engaged at the track.”

The panels will feature specific colours to display pit stop time and when a driver engages the push-to-pass button.

Running order will be updated as the car crosses each of the IndyCar timing and scoring markers embedded around racetracks.

Track position in other motorsports series that employ a similar system is updated only at the start/finish line.

Red will be used to display running order while green will see the running clock activated while a car is in its pit box.

A flashing green “PP” will indicate when push-to-pass is active. 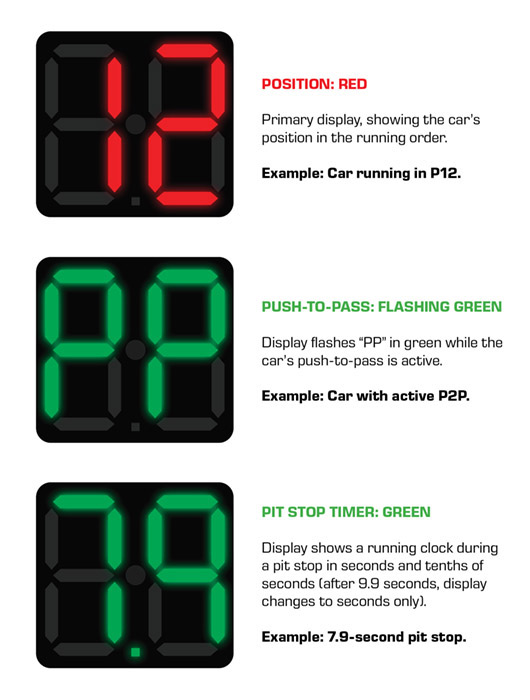