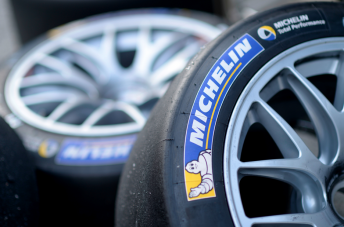 Michelin will consider bidding for the next V8 Supercar tyre contract if the category’s regulations change to ‘fit within the company’s DNA’, according the Australia-Asia marketing boss Tony Menard.

Dunlop have held the control tyre contract for V8 Supercars since 2002, but its current deal expires at the end of 2017.

Speaking at the Michelin Pilot Sport Experience in Sepang, Menard explained that the French firm does not agree with the heavy reliance on different tyre compounds to spice-up the racing.

Menard said that Formula 1, which is supplied by Pirelli, and the World Endurance Championship provide the perfect contrasting examples of how a category can work for a tyre brand.

“We are not against entertainment, we are against using the tyre as the single source of entertainment,” Menard told Speedcafe.com.

“I think the tyre could contribute (to the show), but only when it’s not going against our DNA.

“I am always using the 10 laps (between tyre changes) in Formula 1 as an example.

“I am spending hours explaining to my team how to sell and value the additional mileage we are selling (in road tyres).

“Michelin is always the most expensive tyres for the consumers because we are delivering more performance and more mileage so you have a better return on investment.

“My message is not credible if you are watching TV and it is showing you something the exact opposite. 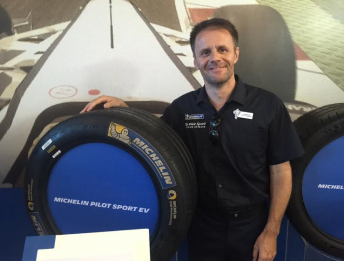 “At Le Mans, saying these guys can run four stints with the same set of tyres – that’s more than 736kms – at more than 225kph average speed.

“In WRC it is the same – when we faced the situation a couple of years ago with not that many competitors in front of us in rally, we ask for a change in regulation to reduce the amount of tyres used in a season by 20 percent.

Menard was careful to be respectful to the V8 Supercar category, which he said he had attended a few times and enjoyed.

While Michelin have traditionally been against championships with a control tyre, Menard said that the company’s mindset had changed in recent years, but only when a championship provided the adequate challenges.

“First of all the technical regulations and the way the car is built (would offer a challenge), the chassis and the rear axle etc,” he said.

“It is not something we are used to, so it could be interesting. They are quite strange, from a European point of view.

“Being in V8, and respecting the series DNA, we don’t want to transform the races they have, let’s be humble it’s not our goal, but combining our objectives with the V8 DNA is the best thing possible (for Michelin).

“The best example is Le Mans. At Le Mans the challenges are there. Why are so many manufacturers involved in this race, because they also have a story to tell with their DNA.”

Menard also believes that V8 Supercars also offers a lot of potential in the areas of marketing and communications.

“I am a marketing guy, so it is normal for me to have ideas, but not always the resources to turn them into reality, but I think there is some marketing opportunities with this series, in terms of bonding and the show,” said Menard.

“It’s well organised, but I get the feeling that there is something to do to reach another standard.

“V8s have potential. V8s are successful, there are thousands of people around at events, but I have a feeling there is more there to do.”