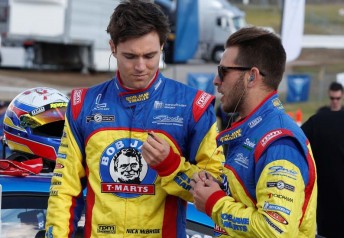 The Porsche Carrera Cup Australia regular has struck a last minute deal with Almeras Racing to compete against competitors from the Italian, French and Asian Carrera Cups at Belgium’s prestigious Spa-Francorchamps circuit.

McBride has previously driven at the 7km circuit when he contested the British Formula 3 Championship in 2012.

“It’s really exciting to head back to Spa this weekend for the joint Carrera Cup round,” said McBride.

“I’d known about the event for some time but never considered racing there until I spoke to my team-mate Nick Foster in Townsville.

“It sounded like an amazing opportunity so I made a few calls and was able to secure a last minute drive.

“I drove at Spa in 2012 in Formula 3 and, while it was a great experience, it was a pretty soggy event so I’m hoping for clear skies and great racing in Belgium this weekend.

“When you’re out of your comfort zone we search for as much familiarity as possible.

“I’ll be racing an identical Porsche 911 GT3 Cup car that I race in Australia and I’ll have Foster’s face around the garage which will also help throughout the weekend.

“We work very well as team-mates in Australia and I’m sure we’ll help each other succeed at Spa.”

McBride, Foster and Cini are scheduled to hit the track for the first time when practice begins on Thursday prior to qualifying on Friday and Saturday’s 45 minute Carrera Cup race.