The 20-year-old produced an impressive drive in tricky wet conditions to convert a pole position into his fifth win of the season in Race 1.

Cassidy was followed to the chequered flag by Nirei Fukuzumi, while Mitsunori Takaboshi secured the final place on the podium.

Cassidy led the second race before contact with Takaboshi saw him forced to settle for second behind Yamashita with Fukuzumi in third.

“It was a great day, from pole to a win at Fuji,” said Cassidy.

“It was a wet race where we made no mistakes and held a good lead to the end.

“It has been a great weekend for us. I led today’s race before being hit, but managed to limp a damaged car home to P2, still leading the championship.”

Despite missing out on a double victory, Cassidy holds a three point lead at the top of the standings with the series set to continue at the Twin Ring Motegi circuit from August 22-23. 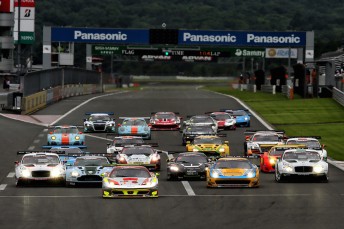 The GT Asia field heads to Turn 1 at Fuji Speedway

Ferrari and Bentley shared the spoils in the third round of the GT Asia Series held at Japan’s Fuji International Speedway.

Clearwater Racing had held the lead until Vilander made mistake at Turn 1 handing the advantage back to TP12 Racing ahead of the compulsory pit stops.

Once the pit stops had been completed Bhirom Bhakdi had a six second gap over the Mok Weng Sun piloted Clearwater Ferrari as the race reached its final quarter.

In the end, Bhirom Bhakdi just managed to hang to take the chequered flag by 0.2s from Sun, with the sister Clearwater Racing Ferrari of Matt Griffin and Richard Wee in third.

Absolute Racing’s Adderly Fong and Keita Sawa came through a thrilling scrap with the Venter/O’Young Aston Martin to score victory in the final race of the weekend.

Fong scythed his way from ninth on the grid to challenge polesitter Venter with the Bentley driver taking the lead just ahead of the pit stops.

O’Young emerged from the pits with the lead but was unable to prevent Sawa from powering through to take the chequered flag.

The GT Asia Series visits Sepang for the next round of the championship from September 25-27. Joao Paulo de Oliveira has moved to within two points of Super Formula championship leader Hiroaki Ishiura after recording victory in the third round at Fuji.

Starting from the front row, the Brazilian took the win by 13.4 seconds from former Williams F1 driver Kazuki Nakajima, with Ishiura completing the podium in third.

The championship heads to the Twin Ring Motegi circuit for the fourth round from August 22-23.