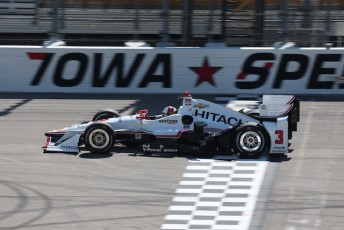 Helio Castroneves spears to his 44th career pole at Iowa

Helio Castroneves has turned his qualifying fortunes around by sealing pole for the Iowa Corn 300.

Juan Montoya, who has lead the points standings since the opening round at St Petersburg, will start from third position after a two-lap qualifying average of 35.23s.

It represented a huge turnaround for Castroneves who was forced to start at the back at the Milwaukee Mile last weekend after a qualifying breach before finishing second.

“We proved (last week) that, when we have a good car, we can come from the back to the front,” Castroneves said.

“Now, hopefully, we stay in front and never look back.”

Scott Dixon will share the second row with Montoya after finishing with an average time of 35.29s.

Simon Pagenaud and Will Power complete Penske’s line-up on the third row while CFH Racing’s Josef Newgarden will start seventh.

Andretti Autosport pair Marco Andretti and Ryan Hunter-Reay are next while the top 10 is completed by Chip Ganassi’s Sage Karam.

Australia’s Ryan Briscoe will start from 19th in the Schmidt Peterson Motorsports Honda.

Last weekend’s Milwaukee winner Sebastien Bourdais will start from last after striking the SAFER barrier at turn 2 on his qualifying run.