Jules Bianchi lost his fight for life on Friday

The news triggered a flood of tributes from Formula 1 circles, as well as the greater motorsport community.

Although Bianchi spent his two years in F1 driving uncompetitive machinery, the 25-year-old had proved his mettle against a host of would-be stars in the junior categories.

Among them was Australia’s Daniel Ricciardo, who first met Bianchi in Formula Renault 2.0 shortly after moving to Europe in 2007.

Driving for SG Formula, Bianchi won the French Formula Renault title in his first year out of karts while also dabbling in the highly competitive Eurocup.

Ricciardo, running a mix of the Italian series and the Eurocup, would later describe Bianchi as “one of the first mates I made when I went Europe”. Bianchi’s career truly kicked off when he reached Formula 3 and began a long association with Nicolas Todt’s ART Grand Prix.

A then 18-year-old Bianchi took third in the 2008 Euro Series before beating Nico Hulkenberg to that year’s prestigious Masters of F3 title. His stellar 2009 season ended with a Ferrari F1 test and Driver Academy contract as the Scuderia earmarked the youngster for greatness. Two years of GP2 action followed, competing in both the European and Asian seasons for best year-end finishes of third and second respectively.

The 2010 campaign, won by Pastor Maldonado, saw Bianchi’s progress halted mid-season when he fractured his back in an accident at the Hungaroring. In 2011, Bianchi and ART were shaded by the speed of countryman Romain Grosjean and DAMS, save for the former’s only career GP2 Series win, scored at Silverstone. A late decision to opt for the experience of Adrian Sutil appeared set to dash the dream, before financial trouble for Luiz Razia created an 11th hour opportunity at Marussia.

The cash-strapped squad would be Bianchi’s home for the next two seasons, out-shining team-mate Max Chilton on the way to a single points finish at Monaco, 2014. By October 2014, Bianchi’s form in the Ferrari-powered Marussia had seen him touted as a possible Sauber driver for the following season.

While the heights that his career would have scaled will never be known, Bianchi undoubtedly earned both his place on the Formula 1 grid and the respect of those with which he shared it. 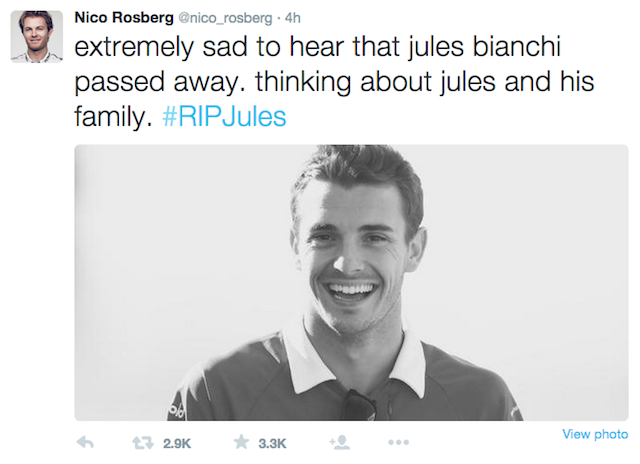